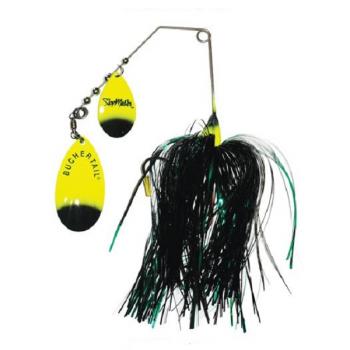 8 inches long, weighs 1.8 oz. The Slop Master tandem Tinsel Magnum is a surface lure that can be fished in some of the thickest, most impenatrable cover there is for big pike, muskies and giant bass.

How To Fish The Buchertail Slop Master Tandem Tinsel Magnum:
The SlopMaster BUCHERTAIL® was designed by hall of fame angler Joe Bucher specifically for muskies, big pike and monster bass hanging tight to extra thick weedy cover. The unique wire arm shape and flat horizontal hydro-planing head combined with one upriding single hook enables this lure to slip, slither and slide through and overtop nearly any obstruction with no hangups. This lure is most effective when conventional lures fail - such as cold front conditions, areas of heavy fishing pressure and anything else that drives fish tighter to cover. Fish the SlopMaster BUCHERTAIL® with heavy weight line test, and a medium/heavy to heavy power rod. Short, accurate, pinpoint casts will nearly always be more productive in any heavy cover situation. Whenever possible, cast the SlopMaster, slightly beyond the target and retrieve it back to the cover. Keep your rod tip pointed directly at the lure with a slight upwards angle. Avoid pulling on the rod tip to work the lure through the cover. Instead, hold the rod stationary while maintaining a steady retrieve - allowing the reel to pull the lure through the cover. When you get a strike set the hook hard with a sideways body rotation. Put a lot of pressure on the fish initially to pull it out of the thick debris. Then, back off a bit when the fish is near the boat, but maintain solid even pressure and strong rod bend throughout the fight.