Iceweve got some! Were already seeing those hard-core ice anglers out there, aiming for early walleye. Were also hearing the annual tales about some with what you might label bad judgement going through the ice. It happens every year. Thankfully, there have been no major catastrophes, but it really stinks to lose your ATV and equipment through the ice! Where it is locked up, were seeing 3-5 inches, so there are some lakes bays that are safe for foot traffic. With some of the bigger lakes still open, over the Thanksgiving weekend we were actually seeing folks getting suckers and looking for musky on the open water, while others were buying shiners and heading out on the hard water. If we get really lucky, we won't get a lot of snow with what is predicted for mid-week, so we can get some more of that thickness build up. It looks like while we may get some days in the upper 30s, the nights will remain good and cold. Everyone from the snowmobilers to the ice anglers would like to see a bit more cold weather before we get the inevitable dump, so we can avoid that slush on both the lakes and the trails.

Walleye action for the few anglers that have ventured out has been good. Try some shallow water fishing in the evenings and after dark, as these fish will move quite shallow in low light conditions to feed. We even know some anglers who fish in waders on shorelines with Rapalas or other stick baits in the evenings. Jigs and shiners are the number one choice for fishing on the ice. Set those tip-ups to intercept the walleye as they move shallow to feed in the evenings and be quiet on the thinner, new ice. A few anglers have also reported good action with Twister Tails and jigs.

Were not really seeing anyone trying for panfish, in particular bluegill, yet. But that will begin as soon as its safer and easier to get around out there.

We heard of a few muskies caught over the weekend, so those willing to brave the cold are getting fish. Suckers have been the poison of choice. With that season closing out this week, we can say it was a decent year for them, with good numbers of fish, but not a lot of size.

Right now it looks like the Eagle River Chain is starting to close  even the bigger lakes. Our guess is by next weekend well see that locked up. Some of the bigger lakes like North Twin will take a little longer, but its coming! If youre going out, be sure to check the ice thickness often as you move around. Caution is better than bravado at this time of the year. Safety first, so you stay warm and dry! 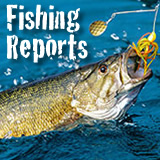 PLEASE NOTE! WE CARE ABOUT OUR CUSTOMERS! IF YOU PREFER CURBSIDE PICKUP WE ARE HAPPY TO COMPLY! CALL IF YOU HAVE QUESTIONS. 715-479-8804.